Welcome to the Middleton Parish Council website. The Parish Council works hard to make Middleton a better place to live, work and visit. Our website includes information about what we do and how we conduct our business. Use the search box or browse the site to find what you're looking for. If you can't see what you need then please contact us.

We have received the following from DDDC:

We have funding available for energy efficiency improvements for on and off gas homes. On gas homes are likely to be offered loft or cavity insulation. Off gas homes could be offered insulation, low carbon heating such as air source heat pumps and solar panels. More »

Each home will assessed individually.

The scheme is open to all qualifying residents of the district who:

This is fully funded for qualifying owner occupiers and works will be undertaken by a Council approved contractor.

Funding is on a first come first served basis, and works are planned to be completed before March 2023. We will hold a waiting list subject to availability of future funding.

Marches Energy Agency (Warmer Derby and Derbyshire) are the partner on these schemes and first point of contact for any residents: 0800 677 1332 (select option 2) or email wdd@mea.org.uk There is also an online form here: https://www.derbyshiredales.gov.uk/environment-and-waste/energy-advice

The Parish Council has received the following message from Gigaclear:

I am writing to you today to firstly, introduce myself as the new Community Engagement Manager for Gigaclear, where I will be directly responsible for upholding Gigaclear's commitment to engaging communities throughout the build phase. Ensuring both you as councillors and local residents are made aware of the work we are doing to unlock the potential of poorly-served rural communities by delivering fast and reliable broadband. More »

Secondly, I wanted to make you aware of some upcoming online drop-in sessions we are delivering for residents across the Derbyshire area, to offer them an opportunity to ask questions and to raise any concerns they may have.

Residents will need to register for these events in advance however, if they have already registered there is no need to register again. I would like to ask that if you have any means at your disposal to help circulate the event details within your community, then please do so. We believe it is vitally important for residents to be offered the opportunity to engage with us.

We currently have two events scheduled for Derbyshire. For further details and to register to attend, please click the links below.

Pumpkin dumping a scary threat to wildlife this Halloween, warns the Woodland Trust 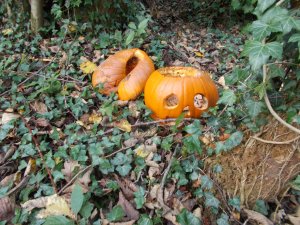 With Halloween looming the Woodland Trust has issued an urgent plea to witches, wizards and spooks everywhere not to endanger wildlife by dumping pumpkins in woodland.

The UK's largest woodland conservation charity has spotted a worrying trend in recent years for Halloween pumpkins to be taken to the nearest wood and left, in a well-meaning but misguided attempt, to provide food for birds and woodland creatures. More »

"A myth seems to have built up that leaving pumpkins in woods helps wildlife. People think they're doing a good thing by not binning them in landfill and instead leaving them for nature" explained Paul Bunton, Engagement and Communication Officer at Woodland Trust.

"But pumpkin flesh can be dangerous for hedgehogs, attracts colonies of rats and also has a really detrimental effect on woodland soils, plants and fungi. We can't leave dumped pumpkins to rot so we end up with an orange mushy mess to deal with at many of our sites."

The Woodland Trust has tips on its website on how spooky leftovers can be best used,

including making a pumpkin birdfeeder for the garden, which should be kept high off the ground well away from hedgehogs.

Trevor Weeks from East Sussex Wildlife Rescue and Ambulance Service echoed the Trust's concern over the risk to hedgehogs because, like other wildlife "they are opportunistic eaters and they spend autumn and early winter building up their fat reserves for hibernation".

"As a result, hedgehogs can gorge themselves on easily available food like dumped pumpkins," Weeks added. "Although not toxic to them the fleshy fibrous fruit can cause stomach upsets and diarrhoea as they are not designed to eat large quantities of fruit.

"This can lead to them becoming bloated and dangerously dehydrated which in turn can be fatal. At this time of year, they can't afford to become ill, or they may not survive the winter hibernation."

According to the Trust, which owns and cares for more than 1,000 free-to-visit woods across the UK, the pumpkin problem seems to be starting earlier and earlier, with supermarkets flooded with cheap pumpkins for sale and pumpkin-picking growing in popularity as a family activity in the run-up to Halloween.

Paul continued: "Thousands of tonnes of pumpkin gets thrown away in the UK after Halloween each year, so it would be great if we could all put that to better use."

He added: "Jack-o-lanterns can be good for wildlife in small quantities in gardens, but not woodland or other countryside. We are urging people everywhere to make soup, make a birdfeeder for your garden, but please don't make a mess of the countryside!"

The Woodland Trust's Love Your Woods campaign encourages people to enjoy their visit while helping protect woods and nature for the future.

Visitors can play their part by following some simple advice, including staying fire-free, staying on paths, taking dog mess and litter home and protecting wildlife by keeping dogs close.